This week I found a little time to do some preventive maintenance on one of my servers.  It was configured as a software raid 5 with 4 disks running Centos 5.  It has worked flawlessly with the exception of a failed 250GB drive last month which was my warning that I better get a move on and upgrade those 6 year old drives before more start to fail.  I purchased some inexpensive 1.5TB SATA 2 Drives (Western Digital WD1501FASS)  and installed them without thinking much about the consequences.  On boot up , the server stopped on the drive discovery.  I went into the bios and configured the serverworks raid configuration and saw a warning about the largest raid collection is 2TB.  That told me that I probably was dealing with a 500GB drive limitation on the current bios. A quick google search confirmed that vendors are still selling the board for a few hundred dollars so I am thinking this should be easy to repair.  I go the super micro site and locate my motherboard and click on the bios upgrade… 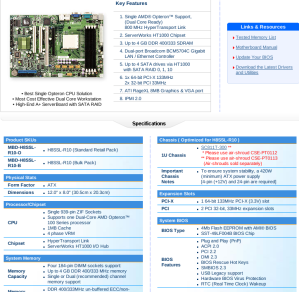 I have two issues with this and I am beginning to worry this might not be straightforward.

Effectively, the vendor has delivered a product and abandoned it from my perspective. I grab the zip file in the hopes to find the release notes.  Nope not present.  I do some quick googling and nothing about this although a close cousin the H8SSL-I has shown the same problem and they patched the bios to help with 1TB drives in 2008.  I contact the vendor and my reseller to see if they had any advice.  My vendor  Genstor gets back very quickly and they have located a  beta bios upgrade but it will only work with 1TB drives and their Super Micro contact has told them it is end of life.  Super Micro gets back 8 hours later with the same information.  So I Upgrade the bios anyway to see if they anticipated larger than 1TB drives… Nope they didn’t but at least now the motherboard no longer hangs or crashes on discovery of my physically connected 1.5TB  drives.  I am able to boot vmware ESXi, Centos 6, and Freenas 8 but only if I disable int 13 in the SATA section of the bios so all is not lost.  Another option would be to purchase a external card like a compact flash ide converter and boot off of that instead of the dvd, floppy, or usb.  Something like: 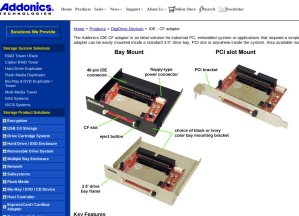 Here is my workaround to access the full 1.5TB and larger drives I assume using what is present.
After that, it works great because we are not using the bios to boot up our OS and once loaded it has full access to the drives.  Seems like a lot of trouble for such an old system but this board has some cool features. It has IPMI (serial over ssh) for out of band and headless support, it has 2 GigE ports, and 4 Sata ports.  It is rock solid and just works.  Finally it is in the house and is working so why not find a use for it. The first test was centos 6 and a speed test to the drive.. over 94MB/s for reads… not bad.  The second test was using Freenas 8 and a ZFS raidz and exported via NFS.  I was seeing over 90MB/s writes on my GigE network here at the house.  That is not a throw away motherboard when you get that kind of performance and the server has stayed up years before reboots. Next test will be with ESXi and then seeing if I can run freenas 8 and centos 6 as guests and using the 1.5TB drives.  To be continued.